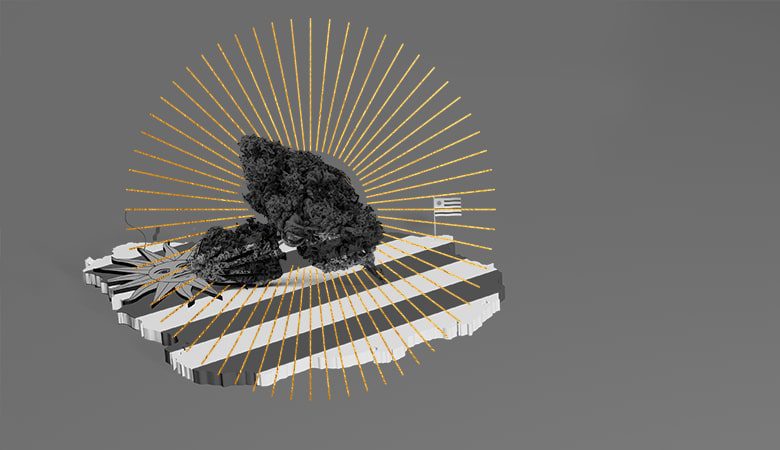 Uruguay is set to increase the THC content of cannabis products sold through pharmacies; moreover, officials have said they will look at allowing tourists to purchase various cannabis products.

Since 2017, Uruguayan adults aged 18 or older have been able to enter a government registry to purchase recreational cannabis from state-licensed pharmacies. But while pharmacies have only been dispensing cannabis products since 2017, personal cultivation and cannabis cultivation clubs—where up to 45 registered adults can share a space to cultivate and consume cannabis—have been available since 2014.

Pharmacies currently dispense two strains of cannabis called ALFA and BETA which respectively contain about 9% THC and 3% CBD. Officials hope that by increasing the THC content of commercially available cannabis, the products will better compete with those grown in the cannabis clubs—which average a THC content of about 20%—according to the report.

This strategic move has been made also with the aim to increase tourism in the country. Tourism is a very important resource for the economy of Uruguay, and its officials take it very seriously for the overall development of the country. Concerning tourist sales, Daniel Radío, the general secretary for Uruguay’s National Drug Board, said on Monday that any change was unlikely to take effect this tourist season but that he will study the possible effects of letting international visitors to the country buy cannabis products, including how it may boost Uruguay’s overall tourism attraction.

In the past, Uruguay has been a pioneer in legalising cannabis products. In fact, it became the first country in the world to legalise adult-use cannabis in 2013 under the leadership of former President José Mujica.

What is the significance of potency when it comes to cannabis?

The vast majority of people who use marijuana, also known as cannabis, do not realize it has become increasingly potent over time. Compared to the 1970s, cannabis is much more potent today. Tetrahydrocannabinol (THC), the most psychoactive chemical found in marijuana, is more potent and has more negative effects than ever due to new production methods like hydroponic cultivation. Because cannabis can cause mental illnesses, it is important to understand its potency.

Measures of cannabis potency are usually based on the amount of THC present in a sample. It is helpful to remember that the European Monitoring Centre for Drugs and Drug Addiction (EMCDDA) in 2004 conducted one of the most comprehensive studies in which they concluded that there were some modest increases to cannabis potency that may be directly linked to the growth of rapidly growing cannabis indoors. The study authors concluded that THC content did, nevertheless, vary greatly between individuals.

According to a study conducted by the UK Home Office in 2008, cannabis potency seems to have remained stable: they found the median potency of sinsemilla plant samples from 2008 to be 15 per cent, compared with 14 per cent for samples from 2004-5. According to the latest reports, the US has reported long-term increases of 10 percent in 2006, with narcotics potency expected to be double that amount by 2008.

The ability to gather comparable data regarding cannabis potency and estimating trends is affected by a number of factors methodological in nature. Phytochemistry is an important variable to take into account when making a decision. You should also be aware of the type of cannabis product, cultivation method, sample method and stability of the product.

The factors detailed below can each have an impact on the measurement of the strength of cannabis as well.

The cannabis plant secretes most of the THC content during its flowering period, particularly when the flowering heads and surrounding leaves become large. There are a number of factors that determine the amount of resin that is secreted by the plant during flowering (light, temperature, humidity), the sex of the plant, and the harvest time. THC content varies according to the part of the plant: in the flowers, it is between 10 and 12 percent, in the leaves, 1, to 2 percent, in the stalks, to a mere 0.03 percent in the roots.

Cannabis products can be classified into three categories: marijuana, hashish, and hash oil. Marijuana consists of dried and crushed flower heads and leaves that encircle the flower head. The THC content in marijuana can be up to 5 percent. A more potent breed of sinsemilla comes from the unfertilized female plant, which is the condition where it is obtained. In the resin of the hemp plant, THC content may range from ten to 20 percent.

An extremely powerful form of cannabis is cannabis oil, which is extracted from the smoked leaves of cannabis

A resin extract is a material that contains resin molecules. These extracts can contain more than 60% of the THC in marijuana flowers. Increasing market share of specific product types can influence reporting average potency values, as can an increase in the market share of the product in question. In addition to the fact that the US Office of National Drug Control Policy reported in 2008 that samples confiscated had an average CH content of 10 percent, it could also have been attributed to the fact that high potency cannabis (probably grown indoors) has gained a 40 percent share of the market.

Produces cannabis with consistently higher potency when grown in hydroponics (without soil) and with optimal growing conditions.

Cannabis potency is determined most often by analyzing samples seized from consumers. In other words, those samples need to be representative of the entire seizure in order to draw reasonable conclusions and extrapolate.

Exposure to air and light results in a conversion of THC content to cannabinol. When THC concentrations are reduced as a result of this procedure, especially in samples that were not stored under ideal conditions (that is, in a cool, dark area), they will be less harmful to the user. The claim about potency increases in marijuana preparations confiscated over 18 years in the United States may not adequately account for stability issues related to THC content in older samples.

In order to determine cannabis potency in different areas and over time, we must evaluate these factors in a structured, scientific, and comparable manner.

If you learn about THC content, you can read about this topic and others here:

Cannabis Company
Silvia is a freelance writer and medical cannabis activist who lives in Tacoma. When she’s not writing about cannabis or working to bring a better medical cannabis system to Washington, she likes to DJ, play adaptive sports and volunteer in his Tacoma community. She supports national legalization and the opening up of the medical cannabis market in all 50 states.